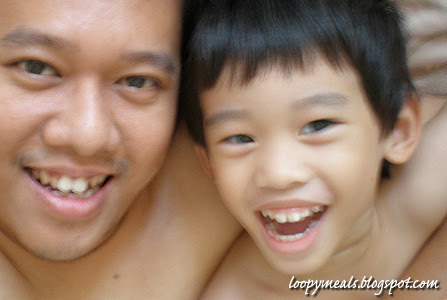 I've been away from home too long.

There was the whole crazy couple of months of nights in the office. There was the company trip to Bali. And even when I touched down at KLIA on Monday at 6:30am, I came right back to work shortly after. And I have been at work since.

Last night was an all-nighter. And right about 6am this morning, I started to lose my mind a little, so I took a stroll around the office building. As I did, I thought about my little family. There was Mae, the wife. Long hair. Lovely complexion (most times). Strong nose. Nice eyes. Tall, almost my height. Slender. And sexy, as long as she doesn't wear those purportedly comfortable but definitely hideous checquered shorts she likes to wear at home.

Then I thought about Jesse. And suddenly, my mind just drew a blank. The wheel was stuck and the hamster inside was probably dead. I thumped the side of my head to reboot. I tried Alt-Ctrl-Del but nothing worked. Try as I might, I couldn't remember what my poor little boy looked like. Not at all. I got the name right, but the face just wasn't registering.

Thankfully I always kept a couple of his passport photos in my wallet. I flipped the billfold and there he was, just like I (can't) remember him. And then I quickly went back to my computer to look at our shots together.

*sigh* I don't think I can make up. Not ever. Looks like I'm gonna be wrapped around his little finger for eternity.

I'm going to Bali. It's a company trip, so Mae and Jesse won't be coming along.

I hate the thought of leaving them behind, while I frolic in the sun and surf, and the guilt of that will probably make me miserable throughout the 4 days and 3 nights. Because it's a company trip, we've been working our asses off the last couple of weeks, so needless to say, I've been at the office a lot. Which left me little time to adequately prep the boy, so I'm not really sure how he's gonna take it.

I never thought I'd say it, but I kinda don't feel like going.
Posted by ThatJames at 7:42 AM 4 comments

Email ThisBlogThis!Share to TwitterShare to FacebookShare to Pinterest
Labels: trips and travels

Three years on and I'm turning out to be a shitty father.

Jesse is a good kid, by my standards. (Which isn't saying much, since I have always had plenty of tolerance for kids.) He doesn't demand for stuff, throw a tantrum in public, or behave like a little A-hole when he doesn't get his way. In fact, he's usually obedient and quite the charming kid. But that's all out the window when it comes to eating, and sometimes, school.

"If you don't eat your lunch," I'd threaten, "the police will come and catch you!"

Right about then, he'd usually look over his shoulder suspiciously, to make sure there are no cops about, afterwhich, he'd proceed to eat like a normal human being. It works for days when he doesn't want to go to school. He'd be crying and throwing a fit. Until his impending arrest.

"If you don't go to school," I'd tell him, "the police will come and catch you!"

When Jesse was still swimming about in Mae's womb, I told myself that I'd never use frighten my boy into submission. But three short years later, I'm breaking my word over and over. *sigh* Worst of all, it's so bloody effective I'll probably use it again and again. The way I see it, he'll probably grow up to hate me for it. Or he'll start slipping me fifty Ringgit notes to look the other way.

I'm sorry, son. Daddy loves you too much to yell at you. Not when all I want is for you to eat well and have a good education.
Posted by ThatJames at 9:55 PM 11 comments

There's A Moral In Here Somewhere

All that's been going on reminds me of a story.

Three buddies decide to go on a trek into the jungles of the Amazon. Like all testosterone-charged, hot-blooded males, the boys ignore all advice against their risky enterprise, scoffing at all tales of caution. However, like all good stories, the arrogant boys get their comeuppance. In the deep jungles of the Amazon, the guys find themselves in the clutches of a tribe of vicious Cannibals.

"You have to give us a fighting chance," pleaded the boys to their captors. The chief of the Cannibals considered a moment, agreed. After all, here was a man who liked to play with his food.

"Since it is the 21st birthday of my only daughter, I will let you off if you pass one simple test," said the chief. "If all of your three penises can measure up to 21 inches and beyond," explained the chief, "I will set you free."

"Okay, let's do this," said the first strapping lad as he confidently whipped out a whopper from his pants. 12 inches of meat, and the guys were off to a good start. The Cannibals were disheartened to see their catch slipping from their clutches. The second guy came in at a modest 7 inches, and their spirits were lifted, for surely their friend can manage more than 2 inches. However when the third fellow undid his pants, to the horror of his mates, therein laid a tiny little weiner. The Cannibals cheered at the prospect of a hearty dinner that night.

"Wait, wait," protested the third guy, "measure it!" The chief Cannibal came down from his throne and took to the task himself. To his disappointment, the last fellow measured exactly 2 inches, giving the boys a total of 21 inches. Begrudgingly, he set the three friends free.

"Thank God for those Penis Enlargement spams I have been receiving," said the first guy as they made their way back to civilisation, "otherwise, I surely wouldn't have managed 12 inches."

"I may not have 12 but I'll bet my 7 inches played a big role in saving our skins," said the second fellow, as the boys gloated about their good fortune.

"But we'd surely be dead by now," added the last fellow most earnestly, "if I wasn't having an erection."

I have never really had the stomach for politics because it all boils down to power and how much people hate sharing it.

I remember my 19th birthday. I was 19, and it was my birthday, and I remember it.

I went to my girlfriend's house to celebrate that evening. I drove my ass all the way across town to see her, half expecting to get lucky a nice surprise. Well, I got a surprise. It wasn't nice, but it was a surprise nonetheless. The girl decided to dump me that night.

She could have picked any other night to do the deed, but maybe she wanted it to be memorable. It's a shitty thing to do to a guy, dumping him on his birthday. But she did it anyway. The bitch.

I wonder what's happened to her. Perhaps she's gone to live in the constituency of Sg. Siput. Heh.

Oh yeah, it's my birthday today. Wish me. And I swear this story is true, except maybe that last part. Any similiarities to current issues are purely coincidental.
Posted by ThatJames at 2:57 AM 15 comments

Over the weekend, we decided to check out the sale at Ikea. Jesse is all enthusiastic, cos it means he gets to visit Småland, Ikea's own kiddie playroom. We dropped him off and left Anie outside to keep an eye on him.

We had only just made it to the kitchen display when I get a call. "Your son is crying, sir," said the voice on the other end. I darted downstairs leaving Mae in a trail of dust. And there I found our boy in tears. In between sobs, Jesse poured out his grievances, but it was all disjointed gibberish. "Boy... took my ball... jump... I want to step on his head." We couldn't make head nor tail about anything, and so we asked Anie who had witnessed the whole thing from afar.

Apparently, Jesse was minding his own business playing with a ball when some ruffian kid decided to snatch it away. The little tyrant had also pushed my boy on the ground, which brought out the waterworks. Then our boy got up and punched his tormentor, which, of course ended with two boys crying.

"Punch?" I asked Anie, "bukan pukul?" I showed Anie an open palm. "No, tuan," she replied in English, "Jesse punched the boy!"

"Good boy," Mommy said as she stroked the boy on the head.

"Umm..." I interrupted, "I don't think we're supposed to encourage that."

At least not out loud anyway.

Don't get me wrong, we always teach Jesse never to raise his hands on anyone. And we don't want him to be a pushover either. So yeah, I have to admit I'm glad he taught that pushy little shit a lesson. Yet, I'm a little concerned with his, "I wanna step on his head" statement. It's got this whole 70s-kungfu-revenge-retribution-movie vibe to it.

We're not really sure how to deal with this.
Posted by ThatJames at 1:03 PM 6 comments