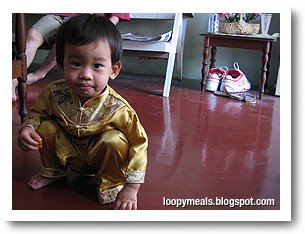 The fun thing about having your own kid is having the opportunity to dress him up in all kinds of silly things for your own amusement. Hehheh. It's one of those little privileges you get from parenthood - your very own home entertainment unit. One who wears anything you give him.

This one's from Chinese New Year. He's got that uncle-ish looks in this shot, which I think goes very well with the outfit. Hahahh. Too bad the kid doesn't do hats. Otherwise we'd have gotten him those little Chinese skullcaps with the pigtails attached. That ought to be interesting.

I have more to say about hats, but these days I hardly have time to blog. So I guess you'll just have to wait awhile before you hear more of my drivel. :)
Posted by ThatJames at 8:12 AM 14 comments

Last week, we took Jesse down to Immigration and made the boy his very own International Passport.

Mae and I awoke at the crack of dawn. Our past experiences with the Immigration Dept. had been hours spent in line waiting, and waiting, and more waiting. Despite knowing that there was a special counter to serve children under two, senior citizens and handicapped folks, we decided not to risk it. And so by 8:15am, we were at Wilayah Kompleks in downtown KL.

"Ah, it's pretty quiet today," I tell Mae smugly, pleased at my own cleverness for picking the most efficient Immigration office. With that we quickly got down to business. We found a shop that took passport photos and also did the paperwork. After struggling with Jesse a little, we were done in no more than 15 minutes. As soon as we paid the elderly woman at the shop, she dropped the bomb on us.

"You'll have to go to Pusat Bandar Damansara," the little old lady says, "this Immigration office has been closed since September."

Anyway, despite having to drive a good 30-ish km to Pusat Bandar Damansara, we were all done by 11:30am. Service was as good as can be expected. The document was done in two days. Mae picked it up today and that was pretty painless too.

So, parents, if you haven't done your kid's passport, go now. After he turns two, you'll be waiting in line just like everybody else. Also, note that you won't need both parents present. And your kid won't have to be there when you collect the passport. Oh yeah, they also get their own passports these days.

So yes, the experience was a reasonably pleasant. Jesse was cooperative most the time, except for the photo session when he fidgeted around like a monkey. And so, just like Mae and I, he's got a shitty picture in his passport too. I was gonna post up a picture, but I'm not that cruel. :)
Posted by ThatJames at 7:20 PM 17 comments

"Oh, look," I tell Mae, "It's Underworld 2!" The first movie was kind of crappy, and so Mae is as enthusiastic about this one as she is about a root canal. I, however, am more forgiving.

"This movie deserves a second outing," I tell the wife, "because it's got Kate Beckinsdale in a tight leather costume." To which Mae reaffirms my credibility as a movie reviewer.

No wonder we never see too many movies these days. Heh. What can I say? Guys are easier to please.
Posted by ThatJames at 4:35 PM 15 comments

"I have bad news," he said, unusually sombre. From the look on his face, I couldn't really tell. Seven and a half months into the pregnancy, the Ultrasound scans display symptoms of Thalassemia. The specialist gave them very bad odds. Their own Gynae suggested they wait and see.

A week later on Saturday, they couldn't wait any longer. She went into labour on Sunday morning. By Monday night it was over. Their baby didn't make it.

It pained my heart to hear it. It still does.

"I didn't carry her," he told me. I understood. People deal with pain differently. He said it best; when you carry your child and put her down later, you fully expect to pick her up again. But not this one. This one left early. And along with her, their hopes, dreams and aspirations for her.

He felt it best to detach themselves and move on. But that wasn't him talking. That was his defense mechanism.

I told him to take his time. Sometimes in a tragedy, people get so caught up trying to manage the situation that they neglect to take some time for themselves. Some time to mourn the loss. Some time to heal. And some time to give thanks for the ones we have by our side.

If you have suffered a loss of an unborn child or know someone who has, do take the time to read this article (click). To learn more about Thalassemia, read this (click).
Posted by ThatJames at 12:03 AM 18 comments

I remember going through a phase of reckless abandonment in my life. It was a time when I felt nothing could touch me.

I feared nothing. Not authority. Not death. Not diseases. Not ghosts. Nothing. Well, except maybe flying frickin' cockroaches and house lizards falling on me. Heh. But other than that, I felt pretty invincible. That of course resulted in me pulling all kinds of crazy shit. Looking back, I'm surprised that I never ended up in jail, or in a hospital or even in a morgue. I was living on the edge and untouchable.

Today, however, is a different story. Today I can't bloody drink coffee without feeling numbness in my forearms. And I love coffee. I'm a Hainanese, for crying out loud!! My people run coffee shops and brew some of the best coffee on the planet - none of that pansy little cup thing or that pretentious foamy crap. But nope, none for me. I get tremors. *sigh*

Also, every morning nowadays, I take these little pills to stop the blood vessels in my brain from exploding and turning me into a veggie. I also have to take another one to stop my arteries from clogging up. Today, living on the edge means forgetting to take my pills. Heh!

Growing old is God's way of taming you. I bet He's up there lauging His head off. "Not so tough now are you, tough guy?"
Posted by ThatJames at 6:07 PM 11 comments

LUNAR NEW YEAR
We went to Taiping and then back again. Then we went to Seremban. In the last 14 days, the C4 has done 2,000 over kilometers. Back in Taiping, some idiot backs into my brand new car. Fortunately, the C4 was designed to take it thanks to its plastic fenders. No harm done. I yelled at the guy a little bit until I realised he was just a kid. After that I just told him to go home.

WEIGHT GAIN
I haven't been to the gym in ages and it shows in all the most unflattering places. Jesse, on the other hand has dropped to a mere 10.8 kgs. The boy refuses to eat solids and there's nothing we can do since he's his own boss. The theme song from Malcolm in the Middle keeps playing in my head. "You're not the boss of me now..."

BACK TO WORK
After such a long break, it's a bit of a pain getting back to work. On the other hand, it's starting to get a little boring not working. I have a love-hate relationship with work. I'd like to have all my weekends in a row and work furiously for the rest of the month until the next block of weekends.

NEW WORDS
Jesse is 18 months old but he doesn't seem to be anywhere near talking yet. He does, however, understand simple phrases like, "pat your tummy", "touch your nose", "sit on the sofa", "stomp your feet", "give Daddy a hug" and "bring Daddy a beer". Okay, I was kidding about that last one.

KEEPING MUM
Mae and I saw "Keeping Mum" sometime last week. It was nice to be at the movies again after such a long time. Keeping Mum is a lovely dark comedy and we both enjoyed it thoroughly, though I would have liked to have watched Jet Li's "Fearless" too. I like watching people hurt each other physically. It's fun.

THINGS TO SAY
Blogging will be like this for awhile. I have plenty of things I'd like to write down here so I can come back some day 20 years from now and feel clever for writing stuff down. Everyone's blogging these days so it's no big deal. But someday when you're old and wrinkly, your grandkids will appreciate you for it. I wish my grandma blogged. She'd have plenty to say, most of which would be profanity. Grandma is cool. Heh.

Ok. I'm done. Tune in tomorrow for more 30-second drivel.
Posted by ThatJames at 11:10 AM 9 comments